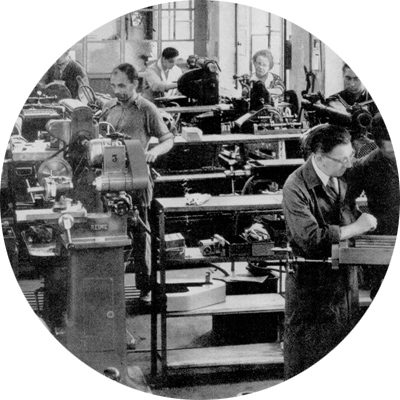 Quality, innovation and precision for more than 100 years

For more than 100 years, threading tools have been our passion and this is to the benefit of our customers.
The founder of the company, Ernst Reime, already began to produce machine-made precision tools when the company was founded on 19 September 1915. Excellent quality, continuous innovation and high precision and the needs of our customers were at the centre of his activities.
The developments of E. Reime under the brand name NORIS quickly caused an international sensation. In 1936, experts at the Leipzig Trade Fair were amazed by ungrooved taps: the NORIS-INNENSPAN and the NORIS-STABIL. A short time later the NORIS-SPANLOS followed.
By the way: due to their technical perfection and high demand, these innovations from that time are still in the NORIS product range today.
Further highlights were the development of the NORIS-TOP-SPEED, a tap for cutting speeds up to 100 m/min or the NORIS-SALO-REX UNI, the first blind hole tap that could cut a wide variety of materials equally well.
The company also demonstrates its extensive expertise in the new segment of thread milling. With the NORIS UNIversal shank thread milling cutter, developed in 1988, core holes, protective countersinks and threads in short- or long-chipping materials are produced in a single operation.
Today, more than 100 years after the company was founded, the same values are the guideline for our actions: excellent quality, constant innovation and high precision and close cooperation with our customers.

NORIS is actually a freely invented name that was first used in 1650 by the Nuremberg physician and philosopher Johann Hellwig. In his book “Die Nymphe NORIS” Hellwig describes the history, constitution and beauties of his hometown. The Nymph NORIS personifies the city of Nuremberg. In choosing the word NORIS, Hellwig followed the Latin form of the name “Norimberga”.
With NORIS, Hellwig gave his hometown a name of lasting value, which was already included in 1740 in the then leading universal lexicon by J. H. Zedler as a “poetic description for Nuremberg”.
Today, two meanings are closely connected with the word “NORIS”. On the one hand it is the name for one of the most beautiful old German cities, the free imperial city Nuremberg, on the other hand “NORIS” is a well-known term for precision threading tools.
In 1936 “NORIS” was registered in the trademark register for Ernst Reime. The diligence, the creativity, also known as “Nürnberger Witz”, and the quality of the “NORIS threading tools” led to the fact that the “NORIS” mark became a trademark of worldwide reputation, a synonym for Nuremberg and highest precision at the same time.